Today I am going to be generous and give two Apps instead of one. As many who have used or even heard of iOS devices know accessibility is a major feature in them and especially functions like Siri that make communicating easier. I recently stumbled across two Apps which are similar and translate text/ voice to American Sign Language.

The first App is Speech2Sign by Parkland School District. I was really excited about this App but it doesn’t seem to work. I believe it is new and the App claims that it can convert your voice into sign. What it did for me was that it converted what I said into pictures of the letters of the alphabet in sign. So I could learn the letters that would allow me to sign those words. I thought the App would be more interactive than just getting pictures which were inaccurate during each trial I gave it. I also found that there is no obvious back button or menu so if I want to try another phrase I have to quit out of the App and restart. The App is a wonderful idea and I wanted so badly for it to work but unfortunately it doesn’t on either  of the devices I tested it on (an iPhone 5 and an iPad mini) Hopefully the developers are working on this and will update the features soon so when they do you will be able to download it from HERE

The second App as mentioned above has a similar theme and translates text to American Sign Language. Marlee Signs by MEDL Mobile features deaf actress Marlee Matlin and all and guides you through various every day phrases and if you want to spell out a word in sign you have to do is type in a phrase and the App will magically translate your phrase into ASL. Unlike Speech2Sign the App produces videos of Marlees translations so you do not have to rely on having to decipher pictures.  The App is initially free and offers a free pack of videos featuring Marlee these videos cover the alphabet, numbers, everyday words, questions and conversations. It is also free to translate a word you type into sign language. As optional add-ons for €1.79 these include around you, home, around town, around the world, and baby signs.

Trying to free features I was more than a little impressed and found it so much easier to learn from videos than pictures which is the only option that many sign language Apps offer.

I would definitely recommend people trying out the App since it is free to try and then you can decide if you want the add-ons. The App can be downloaded from HERE 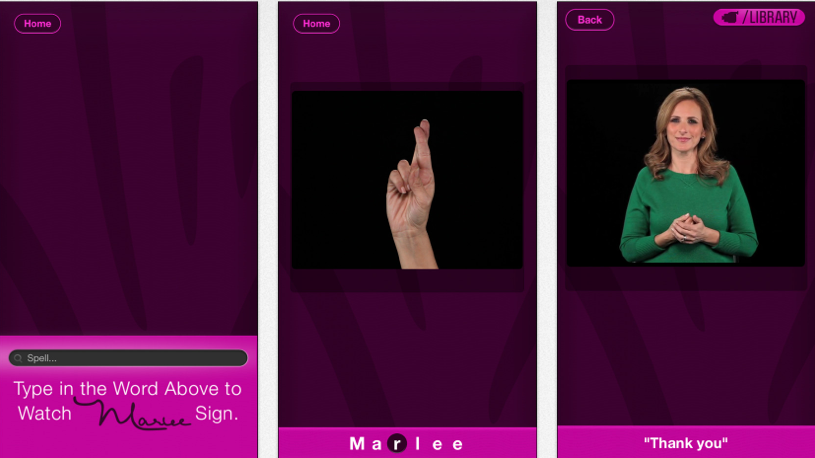