I think it is about time I review these wonderful Outfit7 Apps. I remember downloading the original Talking Tom App about 2 1/2 years ago when I got my first iPad and it had everyone I showed in stitches.

Since then Outfit7 has come a long long way they now have close t0 30 different ‘talking’ Apps and they as good as eachother. Although I do like ‘Talking Larry’ and ‘Talking Rex’ the ‘Talking Tom’ collection are still my favorite. I would have them all but not sure my iPad could store them all. As well as being entertaining to adults I know a few kids that love them too. The remedy to tantrums!!

The Apps all contain a character which you can interact with using the iPads touch features as well as this many of the characters mimic what you say in their own cartoon voice which always ends in laughs.

The only complaint I do have is that as the collection has grown so too have the in-app purchases with many features now being considered extras costing upwards of 89cent. At the beginning I was amazed at how the incredible App was free but the franchise has now become commercialised. That being said there are still some great features.

The recent Apps include ‘Talking Angela’ who now comes with an over 18’s feature which really could be considered ‘explicit’ for kids although fun for adults. I must admit to responding with ‘OMG did she really say that?” to some of her responses. To celebrate Valentines day there are two Apps called ‘Angela’s Valentine’ and ‘Tom’s Love Letters’. Neither of these Apps have a wide range of features so I don’t understand why they didn’t combine them into one but that being said they are pretty fun nonetheless.

So if you have heard of Talking Tom which a lot of people have by now then why not try out the others and if not then there is no better place to start than the original ‘Talking Tom’ App  which can be downloaded for free from HERE. 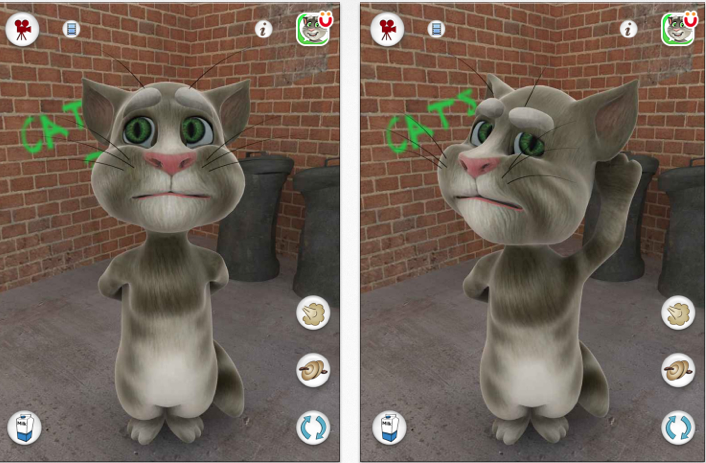