Computer Science week came along fast again this year and students were looking forward to it again. In 2015 we mainly relied on The Hour of Code website. This year, however, there was a chance to re-plan the week to include the introduction of Swift Playgrounds and so we mostly relied on this. I ran a few different classes, one for my students, one for teachers who wanted to teach code and one for students from a local K12 school. Below are details of how the whole process was scheduled. All in all the activities went well and everyone took to Swift really fast. 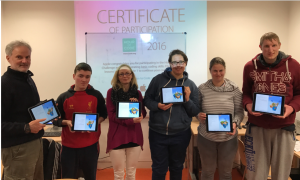 New Directions students who completed the Swift Hour of Code.