So it had been going through my mind for years, the thoughts of do I have laser eye surgery or not. Several failed attempts at wearing contact lenses made the decision. One that could be seen as a last resort if I ever was going to get rid of those glasses that had been so big a part of my life for many years.

The final decision came a couple of months ago. My brother had opted for the surgery and having seen him before and after I figured it would be easy and why not. So a few weeks later I made my first appointment to see Mr. Hurley at Ardfallen eye clinic in the city.
After sitting there and having my eyes poked at and prodded for over an hour the good news came at last. My eyes were healthy enough and I was the perfect candidate for the surgery.

Fast forward three weeks and there I am getting ready on a Thursday morning and putting on my glasses for what I hoped to be the last time. Thoughts were rushing through my head over whether I really wanted it or not. What if I looked stupid without glasses? What if it all went wrong and I would never see again.
Before I knew it I was sitting there in the waiting room trying to fit some silly blue plastic socks over my shoes and attempting the impossible task of fitting all my hair under a stupid surgical hat.
Then it was the long walk down the hall of doom. Well not really but the hall did seem pretty long and grey.
Sitting outside the room I was handed a paper. Like I could have read it but right then I was hoping I would be able to soon. Listening to sounds of the machines creaking and moving inside I began to regret my earlier decision of not taking the valium I was offered.
And then the door opened. It was time to go inside.
“Lie down chin up”. Wonderful that is all I could think. Of course ‘chin up’ was something I was going to hear over and over and over in a tone of voice that appeared to be getting more and more angry every time it was said. Hey, what could I do. I tried!
So then the realization that my eyes were going to be sliced came. This is where you might want to stop reading if you are in anyway queasy!

Well, first of all he took this tiny scalpel shaped object and I could see it coming towards my eye. Half blinded by the light above I didn’t know what to do. I just wanted to up and run but it was too late. It was happening and it was happening soon. As he made the incision there was the weirdest sensation as well as a blurred vision of white and red swirls. Believe me not as pretty as it sounds. Once the flap was cut open (as I was told and could have done without knowing) he moved the laser over my eye. It sounded a bit like a drill from the dentists. I never liked the dentist and I was pretty sure I wasn’t going to like this. “Chin up”, he said. Alright already!! I was trying my best. 30 seconds……….5, 4, 3, 2, 1 done finally. Now for the second eye.

Ouch! Well let’s just say I have pretty small eyes and anyone that knows me will vouch for that. What I have so far failed to mention is the fact that they pry your eyes open with this big metal object before placing this plastic thing inside to keep them even wider open. I am sure these things have names but when they are heading right for your eye they just look like big pyscho killer contraptions.
For this eye the big metal object failed terribly. And the attempts to put it in my eye hurt more than you could ever imagine so the plastic thing had to fly solo and do the job alone.
Yes it was a relief to have it done this way but the result is what the doctor has described as a not so pretty “hickey” around my eyeball. Thankfully it should disappeared within the next 6 weeks.
5,4,3,2,1 done!!!!! At last. Result; a massive sigh of relief. The torture was over and now I could hopefully see the results. Of course they gave me a massive dose of artificial tears so it looked like I was crying for the next half hour. Wonderful!

The journey home was less than pleasant. Of course it had to be the brightest day of the year and my eyes really hated that. When I got home I went into the darkest room I could find. By this stage I was scared of the fact that I couldn’t open my eyes for more than a second at a time without it hurting.

A couple of hours later and after a bit of sleep I could begin to open my eyes slowly and for longer periods of time. This became better as the day went on but I stuck to a dull room and sunglasses for the rest of the day. O
Of course the best part is the fact that I have three sets of eye drops, one to be put in every half hour. This is not so much fun but they really do make a difference and make my eyes feel better.

I had heard that the best part is waking up the next morning and being able to see clearly.
Talking to a friend later that evening he said that the next day I would be “like a puppy who had opened their eyes for the first time”. Yes I really was compared to a puppy but I will leave that one go for now.

So then it was the task of putting on the eye shields for the night. Well this was quite a task. Hand me a roll of tape and two shields and I can do a pretty good job at making myself look like a killer from a horror film and a scary one at that.

So how was the feeling the next morning. One word and one word only can capture the feeling. ‘Amazing’. It was like a whole new world for the first time in years it felt great. I hadn’t had the best nights sleep but my eyes felt good, my vision was good and apart from the gigantic red mark on my left eye there were no signs that I had had anything done at all.

So the next task was to go for a post-op check-up. I was easily amused on the way to the doctors. Challenging myself and seeing if I

Thankfully all the results were good and my eyes have already improved enough for me to drive without glasses and I can read the smallest text that can be seen by human eyes (apparently) so all in all good results after less than 24 hours. Next checkup in 6 weeks and between now and then it can only get better.

So the verdict then. Well if you are looking at getting it done it is not easy and really scary but think of the results are worth it. I would recommend Optilase to anyone. The staff there and at Ardfallen were great. The jury is still out on whether I would recommend Dr. Hurley but overall I am glad I did it.

Check out the photos below. Please don’t look if you are scared of eyes
My wonderful eye. 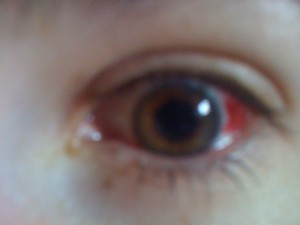