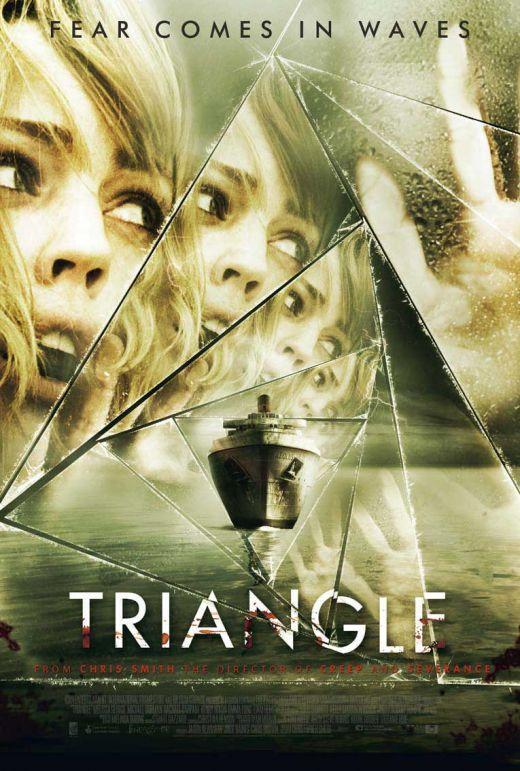 “You enter a place you have never been, everything you see you have seen before”.

Triangle starring Melissa George best known for here part as Angel in Home and Away during the 1990’s is one of those films where all the best bits are shown in the trailer and the trailer would be good enough for the average viewer.

October is a time where it doesn’t take much to make a horror movie do well. But Triangle needed just that bit more put into it.  A bunch of friends go on a boat trip, during a story their boat sinks, they board an abandoned ship. They die. That’s it!

The film tells the all time message that no matter what you do you cannot change the past. That is the only way to describe the extremely repetitive drama.

If you are expecting to be on the edge of your seats and covering your eyes to hide images of a serial killer then you are not going to the right movie.

George is possibly the best known of the small cast and puts up a good performance. From the moment her character appears you can tell something is just not quite right. Appearing distant and depressed her character gives you the sense that something’s up. However this act continues throughout the film and by the end becomes very irritating and I just wanted to shake her to get some life into her.

Other cast members include Emma Lung as Heather, Rachel Carpani as Sally and Michael Dorman as Greg non of whom bring much to the movie.

There are times when you think how stupid can people be, boarding a ship where no one is onboard. This however makes you think something good will come. Perhaps a troop of pirates will hack them all up and eat them for supper. Right? No think again!

There are times in this movie where you may be tempted to leave the theatre. If this happens do not give it a second thought. If you leave you will miss nothing other than the repetitiveness of the scenes being replayed over and over.